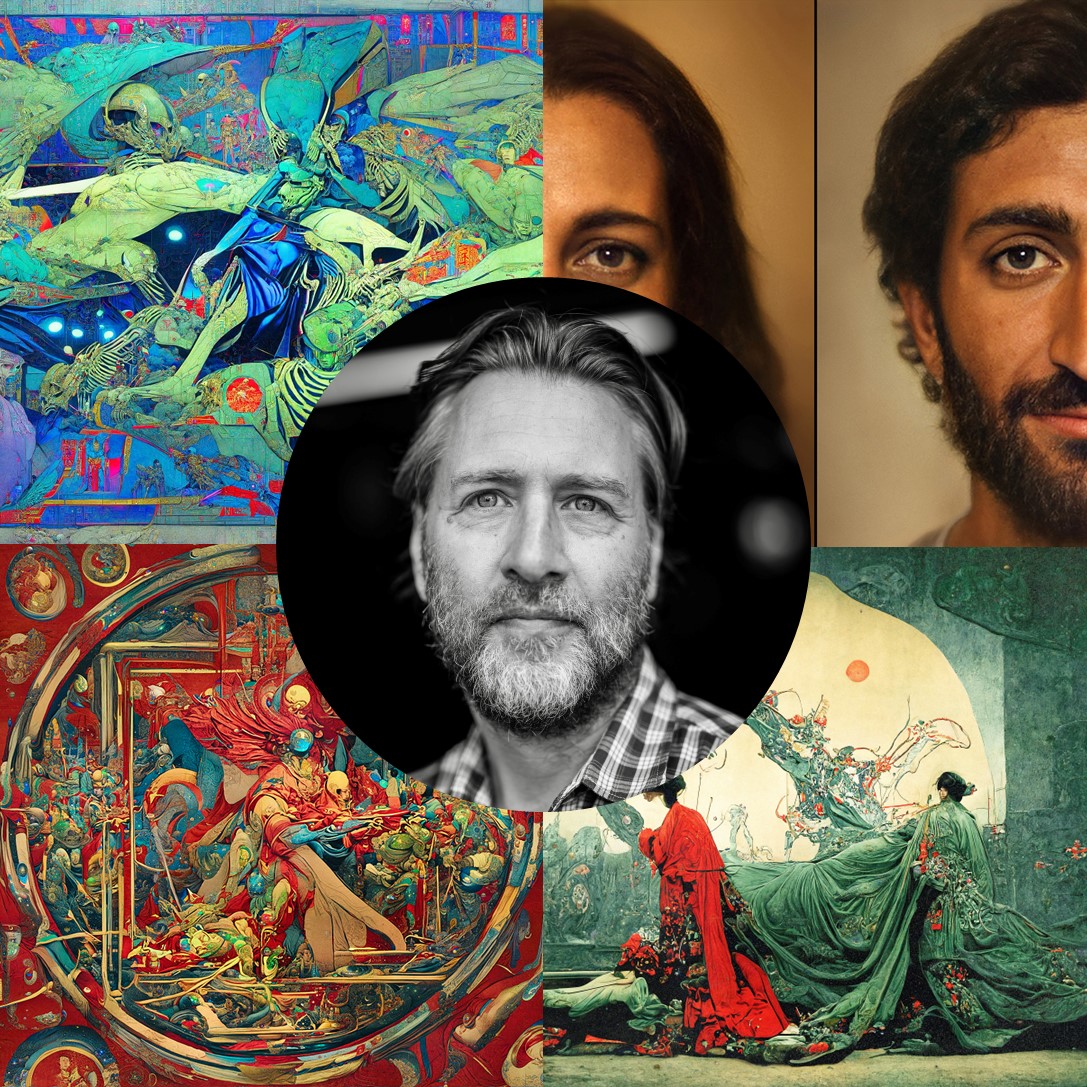 Ganbrood is a digital artist living in the Netherlands. His real name is Bas Uterwijk. He grew up around the corner of the van Gogh Museum and the Rijksmuseum – which both he has visited frequently. As he has been in photography for over 14 years, it was an eye-opening moment when the enormous potential of generative adversarial networks three years ago. His first viral success was his Project „reconstruction of Jesus“.
Bas gets his inspiration from a wide spectrum of artists from both popular cultures and classical periods, as well as from the nature. The fact that he loves nature is the reason, why he has choosen Tezos chain for his mints.

NFT Granny: „Dear Bas – or as most people know you, Ganbrood – thank you so much for your time. Siche 2021 you are minting NFTs on the Tezos chain. How come you have decided to enter this space, and why Tezos?„

Ganbrood: During the pandemic lockdowns, my paid photography contracts stopped. Also, I was looking for a way to finance my new digital art. Of course I was immediately interested when I heard about Non Fungible Tokens, but the ridiculous carbon footprint of ETH held me back. Then some artists I followed started minting on Hic et Nunc in March 2021 and I decided to give it a go!

How did you first become interested in art, and how did you get started with it yourself? How were the steps from special effects to Photography to AI-Photography and now AI-Generated Works?

Ganbrood: I have always been into visual storytelling. First comics and movies and later videogames. I grew up around the corner of the van Gogh Museum and the Rijksmuseum in Amsterdam, with the largest collection of Dutch masters in the world which I visited frequently.
My career was heavily influenced by my passion for the power of image, and I always kept on learning new and other techniques to tell a story with pictures.
A little over three years ago, after 14 years of photography, I was amazed by the enormous potential of generative adversarial networks and threw myself on it fulltime overnight. My career moves have never been really clear to me until now. I feel everything I have done comes together in this new direction.

Could you tell us more about the story of your Artwork “Sweet Heaven, Keep Me in Temper”?

Ganbrood: After minting a couple of photorealistic portraits of people that either existed before the invention of photography or never at all, I really broke through with GAN work, partly based on Art Nouveau and classic Japanese prints. At the time of “Sweet Heaven..” there were so many artists that were adapting a similar style, that I decided to do a single final piece where I used these elements in the for me best possible way to leave that chapter behind me. But I think I still will always be playing around with these artistic influences.

Ganbrood: That is always difficult, like the question “what is your favourite colour?”. There are a few pieces that stand out from the rest. Maybe not because they are my best but because of what they and the reaction to them meant for me at the time.
I did a reconstruction of Jesus in 2020 that went viral all over the world, that was the first time I saw the effect of my work on others.

My Hic et Nunc genesis of Aphrodite was the first work that I sold as a Non Fungible Token.

The Dream of Europa and the Troupe made me see I could guide neural networks to an outcome that expressed my own fantasies very well.

And the ‘Natura artis magistra’ collection was based on my own photographic works.

Ganbrood: I have never done a successful collab. Somehow, my work feels too intimate to share with another artist. I am sure some cooperative works with known names could boost my popularity, I never say never, but for now, I work alone.

Ganbrood: With the introduction of diffusion-based systems like Mid journey, Dall-E and Stable Diffusion, I am forced to re-evaluate my role as an artist as opposed to artificial intelligence.
Suddenly, the whole world seems to be asking questions I have been struggling with for some years now.
At the same time, competition is forcing me to shift my focus and come even closer to myself in my work. Get better and more personal. A good thing, but it can be pretty demanding and suffocating at times.
Recently, I have been talking to people that I hope could bring out the best in me, and I expect that might initiate some very interesting and awarding new projects.
I am curating a virtual AI-art show for early October.

Ganbrood: As I mentioned before, I get a lot of my inspiration from a wide spectrum of artists from both popular cultures and classical periods, but nature is also a very important source for me.
But to be honest: I guess nature is the biggest inspiration for most artist.

How do you enjoy the NFT Art you have collected? Do you have a way to display it for example at home?

Ganbrood: I have a Samsung ‘The Frame’ TV, which not only displays mine and others’ work but adjusts luminance and colour temperature according to the available light, so it looks almost like a print.
Next to that, I have a lot of physical prints of mainly generative works.

Ganbrood: Although the blockchain is the reason NFT’s can exist as they do, the volatility of crypto is something that I wish I wouldn’t have to live with. It makes NFTs look even more like a gambling system than it already is.

Ganbrood: Every good and successful thing attracts a lot of bad people. But I don’t think there are much more sharks and charlatans than in the traditional art scene. I do hate the fact that most media pick up the negative, sensational aspects and the general public does not have a very objective idea of what this movement is really about. But I think they will learn with time.

What does a typical day for you look like, and what do you like to do when you’re not busy with NFT Art?

Ganbrood: Apart from being with my family, I spend most of my free hours on my art, my collection and all the social media communications that come with it. I used to see a lot of movies and shows all my life but even that hobby suffered because of my NFT’s. Luckily, listening to music can be done simultaneously with creating art!