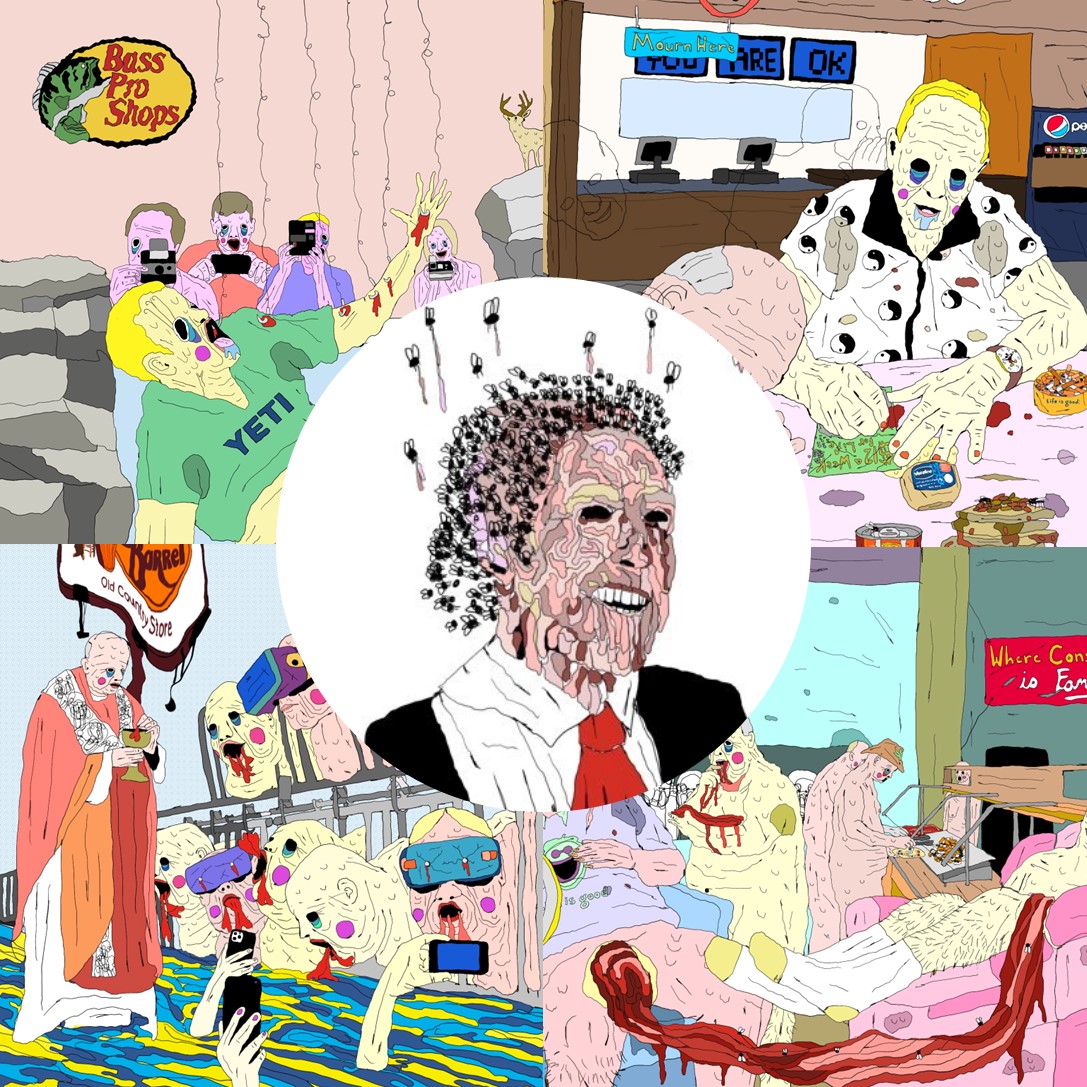 diewiththemostlikes name is as memorable as his art. His interest in art started with books and might still be his favourite art form. His art examines the hilarity of our demise and our indifference’s sadness. He gets his inspiration from the people surrounding him. He believes that we collectively fuel each other.

NFT Granny: „Dear diewiththemostlikes – thank you so much for your time. Your style is nearly as special as your name. How did you come up with this nickname? What does it mean and what is
the story behind it?“

diewiththemostlikes: Several years ago, I considered the humor in punctuating a forgettable existence with one final harvest of inconsequence. Dying in some hospital bed with a family who’s grown to resent you, and the only thing making your heart beat for one more insufferable moment is the prospect of accumulating digital adoration. That humor or
ridicule of our absurd existence is the retreating vein pumping blood to my pieces.

Creating for the sake of creation.

diewiththemostlikes: The Legalize Ground Beef collection is a distillation of our collective regret, grieving and depravity. The collection examines the hilarity in our demise and the sadness in our indifference. It is every home town ever experienced all at once. It is your legacy shovelled into a trough with other parts, memories, and fragments of existence consumed by ketamine insects.

diewiththemostlikes: There isn’t a permanent hierarchy, or at least not one that I adhere to, allowing each one their opportunity to infect or tarnish based on the particular day or meal or state of impairment.

diewiththemostlikes: It would be incredible to fully realize the flesh ringers series with Dmitri Cherniak, or create a three-dimensional portrait of the Walmart Yodel Kid dressed as Darth Maul with Coldie, or make a painting that only exists in a festival porta potty with Skygolpe. Or create a portal into uncontaminated childhood memories out of polyester plastic with Sarah Zucker.

diewiththemostlikes: I have a piece going up above a Krispy Kreme donut in September. But otherwise, the plans are to wreak as much havoc as possible. Create nothing. Consume everything.

diewiththemostlikes: I’m propelled by every person blasting their consciousness into oblivion. In many ways, we’re all collectively fueled by each other, and I’m grateful as fuck for that. Having never been around much art and now to be baptized in its psychedelic toilet water every day is a goddamn treat.
Outside of that, The Cares of a Family Man by Franz Kafka.

How do you enjoy the NFT Art you have collected? Do you have a way to display it for example at
home?

diewiththemostlikes: I regrettably don’t but there is unrivalled calmness in even sitting with a record on and observing through a computer screen, resurrecting the feeling you felt in the piece when you collected, wondering how someone’s imagination could manifest so differently.

What would be your biggest wish for the NFT Art scene? What is currently missing / not fully
developed to reach full potential out of it?

diewiththemostlikes: The eradication of idiotic purposeless transactions on Twitter. Influencers and celebrities are birthing malnourished shits into agape mouths. Napalm all engagement farms.

What does a typical day for you look like, and what do you like to do when you’re not busy with NFT
Art?

diewiththemostlikes: I still work a full-time job creating digital waste, so most of my day is spent feeling my retinas detach while getting tongue lashed by someone in a failing marriage who will eventually die alone doing something they hate.

diewiththemostlikes: Someday, you’ll grow up and disappoint everyone.