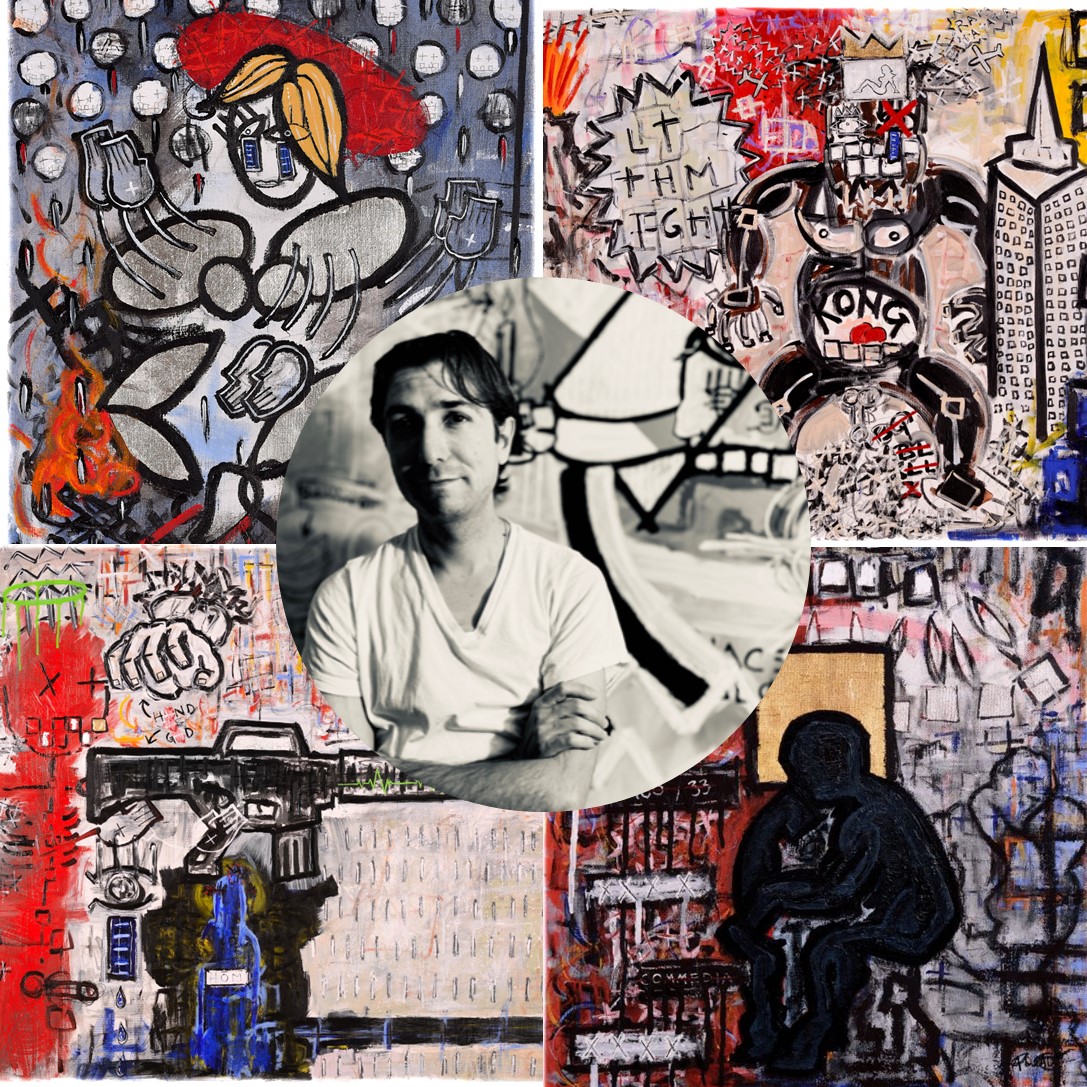 Adam or better known as AD_AD is a digital artist based on the east coast of US. He likes the rephrased quote of James Joyce that the role of artists in culture is to reveal the demons of humanity to humanity. His main source of inspiration is artists from other artists. Adam learned of NFTs from one of the great gatekeepers of the London Art Scene and he thinks that mainstream adoption is needed to reach digital Arts full potential.

NFT Granny: „Dear Adam – or as most people know you in the digital Art world: AD_AD. Thank you very much for taking your time. You run your own discord. When did you decide to have your own one and why?„

AD_AD: Good day NFT Granny, thank you for taking the time to speak with me.

The AD_AD Discord was created in December, 2021. Hic Et Nunc had gone dark and there was a lot of talk about where to mint on Tezos. When HEN died I felt like the end of an era and instead of trying to recreate it on the mirror sites (Teia, hic.af) I leaned entirely into Objkt as the place to mint on Tezos.

I saw the Tez community become divided over the decision of how to proceed after the death of HEN. The AD_AD discord was an attempt to rally collectors and artists who I had developed relationships with together in a time of uncertainty and help maintain collector and artist confidence in what we had been building.

Today the AD_AD Discord is many things. It is a place to share and promote other artists and say gm, and there are two closed groups for collectors who hold my work – which is where I generally announce new drops first. Community is the true value of the digital art movement. Through the NFT Space I have found my people. Discord and Twitter is how we connect on digital art.

Final note – keep an eye on Deca. I’m excited to see what they are building 😉

AD_AD: There are a few key moments that rang the bell inside me so-to-speak, and one specifically was reading ‘A Portrait of the Artist as a Young Man’ by James Joyce. This book spoke deeply to me – specifically when Joyce wrote that the role of artists in culture is to reveal the demons of humanity to humanity (paraphrase). My take was that the job of an artist is to explore the frightening and misunderstood aspects of human nature. I still believe this today. I think artists both heal and develop culture by presenting difficult concepts in a way that challenges or provokes the viewer.

In 2014 I felt a call to return to painting after devoting my artistic career up to that point on writing. In January 2014 I injured myself and had to leave my job – I was working as a cook in a restaurant at the time. I went and bought some art supplies and painted ‘Self-Portrait I – Man on Fire.’ Though I have paintings that pre-date this piece, I consider this to be my genesis work as an Expressionist Artist.

Could you tell us more about the story of your work “Chicken and Rice”?

AD_AD: ‘Chicken and Rice’ is a direct tribute to Jean-Michel Basquiat’s ‘Arroz Con Pollo.’ It is a commentary on matriarchal expectations. It states that the world expects everything from women and takes everything.

AD_AD: I just finished a massive project called the AIAD Exhibition. 10 collaborations + curation and a full-scale exhibition at TIR Gallery in Voxels. That project took a ton of energy so right now I’m regrouping a little.

I have been working on a series for a long time that I may be able to finally announce in the next couple of months. I’m not sure when it will be ready to be shared. It is a collection of digitally native 1/1s focusing on one of my favourite and most recognizable symbols: The 24k Gold Square.

Is there something specific you are trying to express with your art?

AD_AD: I work to explore the unseen elements of creation. That is what much of my symbolism is directed toward. The Quanta symbol is a building block of creation like a photon, or an electron, or the soul. The 24k Gold Square represents both sacred and profane – the duality of high and low that exists in all things.

I believe everything physical is a manifestation of an unseen prior thought or action. I think this is especially true with people. Everyone carries with them experiences, memories, and influences that define who they are. When the viewer considers a piece of art, their perception is shaped by relativity. In this way art is like a mirror that can reveal a more honest reflection of a person than an actual mirror.

What do you feel when you are creating new art?

AD_AD: It depends on what stage a piece of art is in. Some stages I don’t feel anything. My process is an oscillation between execution with thought suspended and then post execution critical analysis. As a piece develops the length of time between the phases shortens until I’m working inside micro-pockets between execution and analysis. Once a piece has reached this stage the feeling is truly life-giving. It is indescribable. At some point you reach a place where it is not about what you are doing but how you are using the time you are given. When I am working on a piece of art after it has turned this corner I feel like I am using my time in unity with purpose and will. It is one the greatest feelings in life.

Do you remember the first time you heard about NFT Art?

AD_AD: Yes, I learned of NFTs from one of the great gatekeepers of the London Art Scene. I will not name him. I could tell from his expression that he was threatened by them. So I immediately began learning everything I could about what NFTs are, how they are traded, and how to create them. And I’m still learning 🙂

How do you enjoy the NFT Art you have collected? Do you have a way to display it for example at home?

AD_AD: I am an art collector who enjoys the feeling of ownership and have been able to support another artist. When I do choose to enjoy one of the digital art pieces in my collection in my physical space I put it on my computer full-screen and enjoy it that way – sometimes while I’m working, sometimes while I’m relaxing.

AD_AD: The only wish I have for the NFT Art Scene is that it keeps growing and thriving. I believe we are creating the future Art Market. It’s important that we remember best practices today so that what we are creating now will be its best version tomorrow. Mainstream adoption is needed to reach full potential.

AD_AD: The only wish I have for the NFT Art Scene is that it keeps growing and thriving. I believe we are creating the future Art Market. It’s important that we remember best practices today so that what we are creating now will be its best version tomorrow. Mainstream adoption is needed to reach its full potential.

AD_AD: I don’t know – I don’t get surprised very easily. Though it’s a relatively new market the energy source is human. Whatever the crypto art scene is today is a snapshot of the humanity involved in making it so. Greed is the same as it has always been. And so is altruism.

We would really like to know, where do you see the NFT Art scene in the future?

AD_AD: I think the NFT Art scene is the future traditional art scene – and mainstream adoption is inevitable. It’s not a matter of if but when.

Which tools do you use to create your art?

What does a typical day for you look like, and what do you like to do when you’re not busy with NFT Art?

AD_AD: Wake up, do my daughter’s medical treatments (she has PCD – Primary Ciliary Dyskinesia), get her to school, take our dog out, work until I get her off the school bus, do her second medical treatment, eat dinner with my wife and daughter, get our daughter to bed, then work until midnight. Wake up and do it again.

AD_AD: That I have gifts and I am obligated to use them – however I need to balance my life between having a family and my life’s work.

Is there something aside from art or NFTs you collect?

November 30, 2022Hackatao
Hackatao is the union of the two beautiful parts "S+N". The name stands for a creative dynamic balance. Their interest in art has always been a part of their lives since childhood. They both began their creative path by making …
November 23, 2022Giovanni Motta
Giovanni Motta is an artist living in Verona, Italy. He came up with his famous character Jonny Boy about 20 years ago as a way to heal his wounds. His entire life, Giovanni has been very creative. He had always …
November 17, 2022David Henry Nobody Jr
David Henry Nobody Jr is a digital artist living in Brooklyn, NY. He has a 30-year repertoire as a performance artist. By age ten, he taught himself to draw in perspective; by age 22, he moved to NYC with his …
November 11, 2022Tania Rivilis
Tania Rivilis is a Digital Artist based in Germany and Portugal. She started painting to express herself nine years ago. Her inspiration comes mainly from people, their faces, eyes, and gestures. She actualizes the old pictorial tradition in new systems …
November 4, 2022foodmasku
Foodmasku is a performance artist based in NYC. His real name is Antonius and he started his creative performance journey in early 2020 during a video meeting with a friend. He would love to collaborate with Claire Silver and is …
Oktober 17, 2022railaite.rob
railaite.rob is a digital arist who has been doing art for her entire life. Her artworks are "painful, nostalgic and beautiful", and she explores the deep emotions of human existence. She gets her inspiration from the every day and nature …